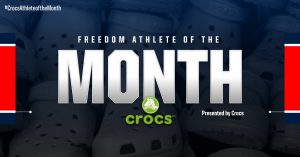 Congratulations to Senior Kalani Rivas who has been named the Freedom High Athletics: Athlete of the Month Presented by Crocs.

As a member of the Girls Wrestling Program, Kalani became the program’s first four-time state placer. In February of 2020, Kalani became the 2020 State Champion in the 134 Weight Class. Kalani has maintained a 3.4 Unweighted GPA, and has her National Letter of Intent to wrestle at Limestone College in Gaffney, SC.

“Kalani has worked hard for the last 4 years to become the best athlete she can be. She has not missed a single 6 am lift or wrestling practice in 2 years, often pulling double duty and attending boys varsity practice after her own. Kalani is bold, because she is willing to do whatever it takes to be successful. She put it all on the line in the state tournament finals against a girl who had beaten her twice previously during the season. In the match to win State, she won 6-3, not letting previous defeats control her mindset. She is unique because she is a natural leader.” – Coach Lynzie Doll

About the Freedom High Athletics: Athlete of the Month Presented by Crocs program: 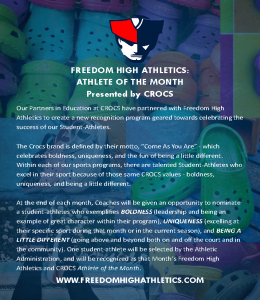