During Mr. Allen’s time in the military, he served as the communication specialist for an infantry unit with one tour in Afghanistan. Mr. Allen’s heart was in always in athletics and fueled in a desire to coach and teach, after separating from the military he enrolled at the University of Mary Hardin Baylor in Belton, Texas and walked on for the Crusaders before an injury sidelined him. After the injury, Mr. Allen assisted the Crusaders with their academics and recruiting soaking up as much knowledge and experience as possible.  Mr. Allen graduated with a Bachelor’s degree in Physical Education and minor in humanities and a master’s in science in Sports Administration and educational leadership.

Mr. Allen is married to his beautiful wife Alyssa and has one son Jaiden, they are also expecting a beautiful baby girl this Fall. 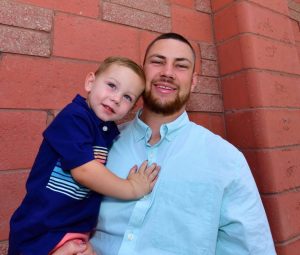 Nate Kallal is in his fifth year serving at Freedom High School. Mr. Kallal moved to Orlando in 2013 to help start the football program at Faith Christian Academy. Mr. Kallal graduated from SAGU (TX) after playing football for 3 years and serving as a student assistant his senior season due to injury.  Mr. Kallal is a Social Studies teacher on campus and has been a position coach on the football team as well as the head boy’s weightlifting coach and assistant girls weightlifting coach. Mr. Kallal’s biggest desire is to see student athletes succeed not only in competition but also in the classroom and more importantly in life!

Tawn Tooks has been at Freedom High School since opening day in 2003.  Ms. Tooks has worked in the media center, guidance department and majority years in the discipline office. Ms. Tooks is a part of the coaching staff where she has coached flag football and bowling. Now that she is a part of the athletic department as the administrative assistant, she strives to assist the athletic department to work efficiently with staff and students and to help ensure the student athletes work and achieve their goals.

Robert Caraballo serves the Athletic Department as the Sports Information Director. He works behinds the scenes within our Athletics Department to share in the accomplishments of our student-athletes and coaches, and also to help build the brand of Freedom Athletics.

Coach Rob is avid New York Yankees and North Carolina Men’s Basketball fan, and enjoys watching movies and spending time with his family during his time off.

No Events This Week

Events are added by athletic staff.
View All Events